Over the years, we’ve worked on a range of psychometric assessments; from cognitive ability to personality tests and SJTs, we’ve prepared them for translation, made them available in over 100 languages and assisted in validating the translations.

For some of our clients, each assessment that we translate will be completely bespoke, whereas others will involve customising text from an off-the-shelf test and or adjusting the assessment according to the client’s desired competency model or scale names.

Where content is identical in multiple places, or even just similar, it’s important to make sure that it is translated consistently. For example, in a candidate report, you might see:

There is clearly a high level of visual symmetry between the high, medium and low score texts, which would ideally be maintained (where possible) in each language version.

When translating psychometric reports such as these, we use Computer Assisted Translation (CAT) tools to help manage our work and ensure that it’s completed in the most efficient way possible. 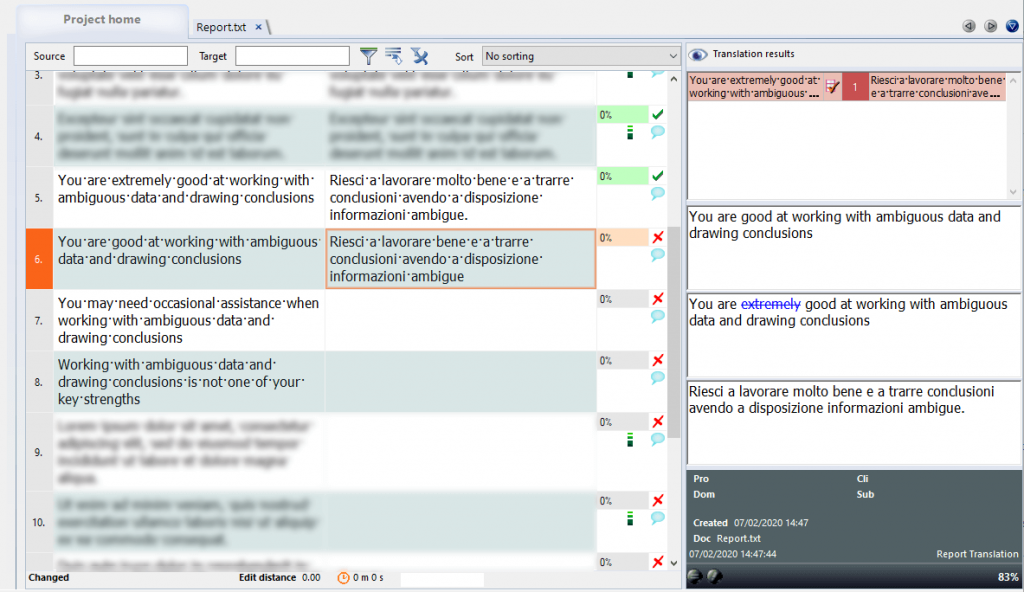 As you can see above, CAT tools record translations as they’re completed by the translation team (those cells showing a green tick), and then suggest and recall similar text as it appears later in the document.

In the above example, the orange-coloured row shows 83% similarity to the segment/cell above that has already been translated and saved to the translation memory.

The area on the right shows all those results from the translation memory that match or are similar to the text being translated in the current segment, cell #6. It shows a sort of “track changes” view of differences between the English that has already been translated and the English that now needs translation, so that linguists and quality assurance checkers can see the changes that also need to be made to the previous translation to transform it into what’s now needed.

This is ideal for report text such as this, where there are small changes between texts for different score values (high/mid/low), as well as for translating psychometric reports from different (yet similar) assessments where there is overlapping text, since previous work can be easily reused.

So, by using a CAT tool rather than an online system or a Microsoft Office application, we can make time and cost savings, as well as improve the quality and consistency of language used.

Where it can go wrong

While CAT tools can clearly be a blessing when translating psychometric content, they can also cause major issues if not used carefully.

We often hear from clients whose previous translation agencies have used translation memories for assessment content, only to find that the items translated end up not functioning well, if at all!

Admittedly, this isn’t the fault of the CAT tool, rather it’s a lack of experience translating assessments, but CAT tools can make it too easy for the unsuspecting to stop an item from functioning in translation.

This is especially the case for verbal reasoning tests, where two different items may use the same answer option in English (i.e. “clear” and “clear”), where in fact one of them needs to be translated as “transparent”, and the other as “understandable”.

If this goes unchecked and a translator doesn’t consider the difference between the two, simply using the existing translation because it’s been “used and approved” could cause massive issues and make the item unsolvable!

Another area that can cause issues in report translations is the use of gender. As we’ve seen, translations of repeated text can be easily recalled using a translation memory.

This can potentially cause problems when it comes to reports with multiple gender versions. We’ve had discussions with clients who have created a “gender neutral” version of a report, and who then expect to be able to directly reuse the same translated content as stored in their translation memories in the male/female versions of their reports where the English sentences are the same.

Admittedly, it’s perhaps initially a little difficult to grasp in English, but in French, for example, a change to the gender of the person being addressed can affect the whole sentence, even if there are no changes to the English. Take this sample of text from a candidate report:

Just because there’s no mention of “he” or “she” in English, this doesn’t mean that in other languages you don’t need to specify the gender of the “you”; in French you’d have multiple versions, depending on whether the text is for a male/female or “other” respondent.

This same principle affects many languages, and in some, it’s impossible to fully remain gender neutral without rewriting the whole report.

If you’re interested in the concept of gender in reporting text, we’ll soon be posting an article on how this works in other languages. Stay tuned!

But for now, before jumping straight in and using translation memories for psychometric content, make sure you consider the benefits and drawbacks according to the specifics of the content being translated, and never assume that something will work the same way, just because it does in English!

Sam is responsible for looking after our clients in the UK and the rest of Europe. He is also our technical guru and loves working with our clients to help them find solutions to their technical challenges, and ensure that their systems can handle a wide variety of different character sets and languages.

Sam can be contacted on: sam.whatley@commsmultilingual.com